We watched four different versions of wayang kulit, the traditional Indonesian art of shadow puppetry. Also included are reports on what students studying to become dalang (wayang puppeteers) do in class at university, and the “Ramayana Ballet” which was the progenitor to wayang puppet movement. 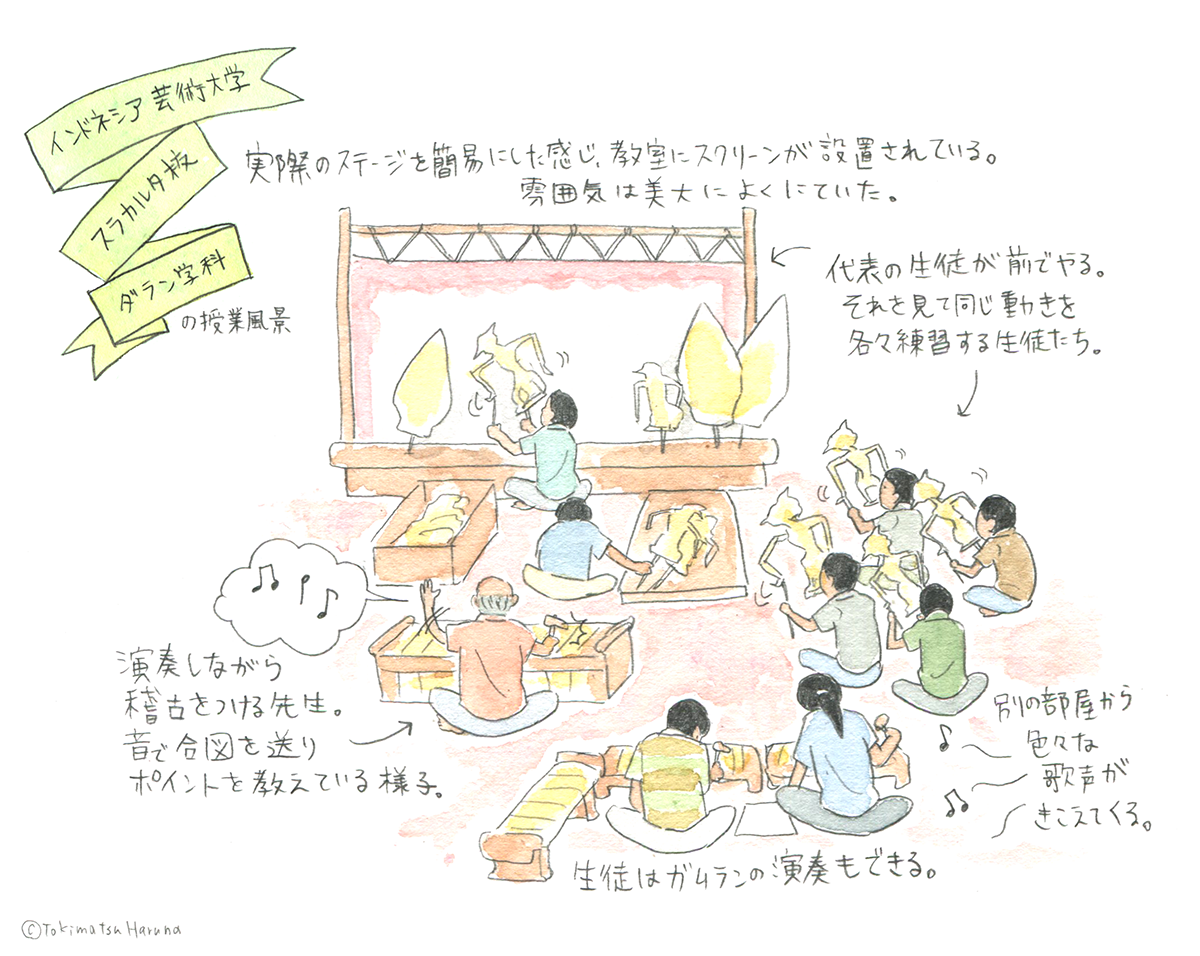 1.
A scene from class in the dalang department, Indonesian Institutes of the Arts, Surakarta

2.
A simplified version of an actual stage
There is a screen set up in the classroom.
It felt like art school.

3.
Model students are in the front. Other students practice the same movements as they watch them.

The teacher conducts rehearsal as he plays music.
He signals with sound and gives the students instructions.

5.
Students can also play the gamelan.

6.
Various other singing voices can be heard from other rooms. 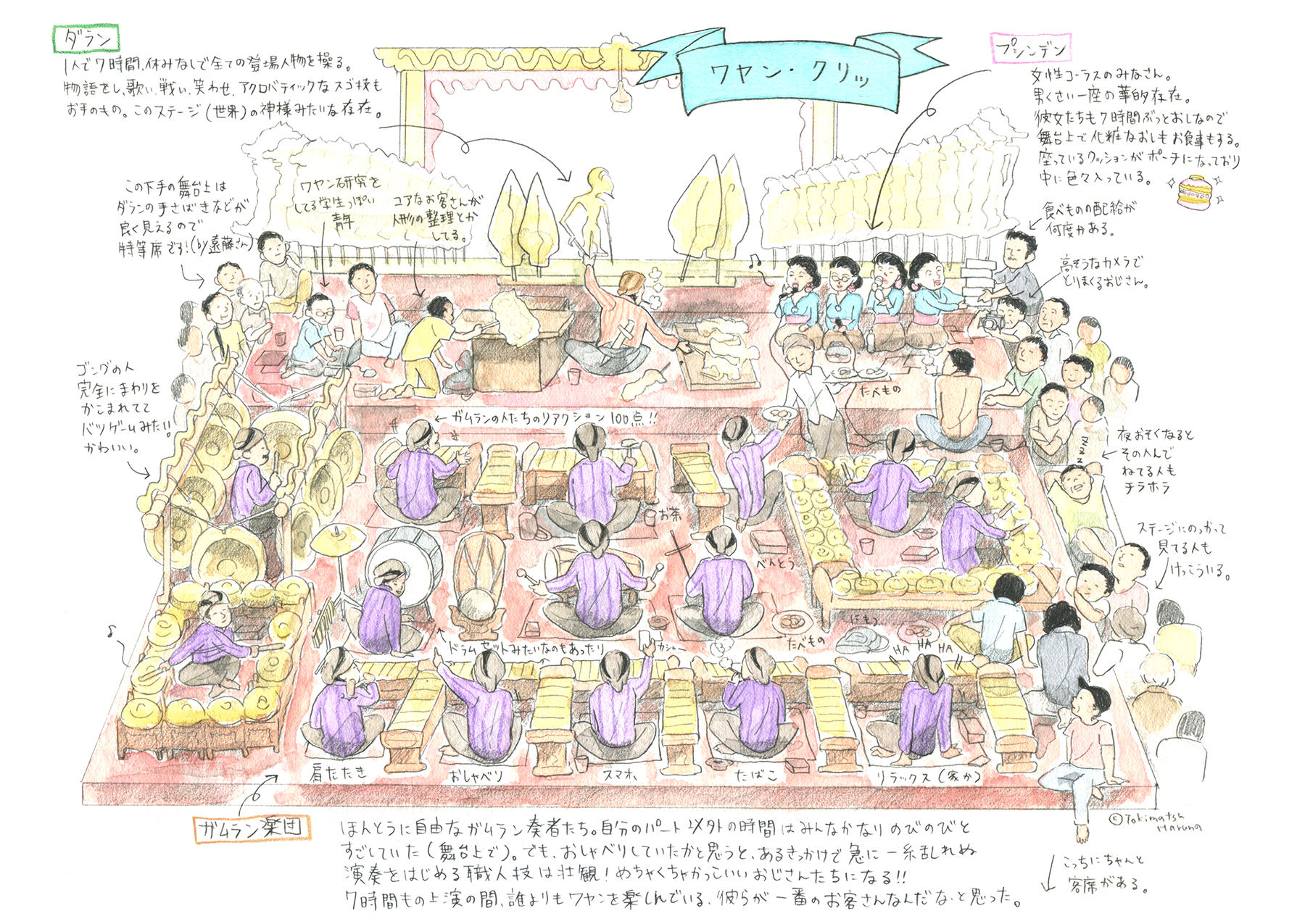 2.
Dalang
For seven hours straight, without break, he manipulates the characters by himself. He is the storyteller, the singer, he battles, he makes everyone laugh, and he can execute amazing acrobatic moves. He is like a god in this stage world.

3.
Pesinden
The female chorus. They are an enchanting presence among the male company.
They also perform for seven hours straight, so they fix their make-up and take their meals right there on stage.
The cushions they sit on are like pouches and they keep assorted items inside.

4.
Meals are distributed several times.
An old guy taking photos with an expensive-looking camera.
When it gets late at night, there are people who are just sleeping here and there.
Quite a few people get up on stage to watch the show.

5.
There are proper audience seats here.

6.
“These are the best seats because from stage right you can really see the dalang’s technique!” said Endo.

9.
The gamelan players have the best reactions!!
There was something that looked like a drum set. They’re also giving each other shoulder rubs, they check their smart phones, smoke cigarettes, and relax (like they’re at home?!)

10.
Gamelan ensemble
The gamelan players are really free. Unless they’re playing their part, they’re just hanging out on stage.  One moment they’re just chatting away, but the next moment they suddenly begin playing perfectly on cue. It’s a grand show of craftsmanship! They transform into super cool guys!! They seemed like they enjoyed the wayang for the whole seven-hour performance more than anyone else.  They are the best audience. 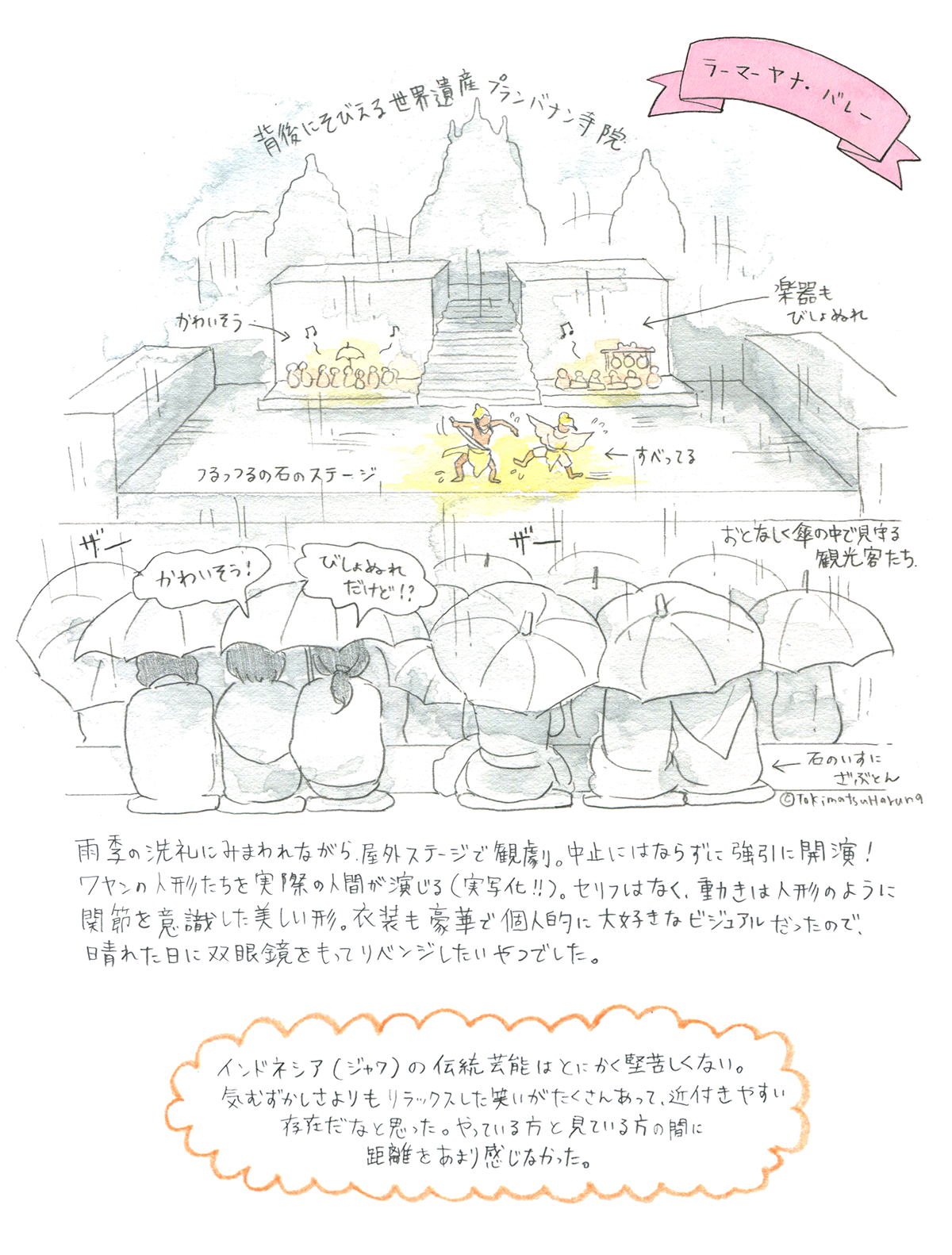 2.
Prambanan Temple, a World Heritage Site, is the setting.

3.
The instruments are soaking wet.
I feel sorry for them.
Slippery stone stage
Slipping

4.
“I feel so sorry for them!” “They’re totally soaked!?”
Audience watching quietly from under umbrellas

5.
Cushions on top of stone seats

6.
We watched a show on an outdoor stage baptized by the rainy season. It wasn’t cancelled – the show must go on! Actual people were performing wayang puppets (live-action!). There was no dialogue, and their movement was beautiful, mimicking the puppets’ indirectness. The costumes were gorgeous. It was personally totally my taste visually. I wanted to go back on a sunny day with binoculars.

7.
Traditional Indonesian (Javanese) arts are not formal at all. I felt they were accessible and tended towards easy laughter rather than solemnity. There was little distance between the artists and audiences.