November 6, 2016. A talk between Natsuki Ikezawa, writer/poet, and Yuichi Kinoshita, artistic director of Kinoshita Kabuki, took place in ROHM Theatre Kyoto as part of Kyoto Experiment. This text is a reconstruction of that conversation. Yuichi Kinoshita continually take on the challenge of modernizing classical performing arts while Natsuki Ikezawa serves as the editor to “The Complete Works of Japanese Literature” (Kawade Shobo Shinsha Publishing) which is a collection of modern retranslations of classical literature. The conversation kicked off with Kinoshita expressing his respect towards Ikezawa. Over twelve acts and more than 20,000 characters, we proudly bring you the stances, intentions, relationships, speech patterns, and everything else about these two artists we could stuff into the text!

[Act One] Ikezawa: It was truly interesting, and I want to see it again.

Kinoshita: Ladies and gentlemen, thank you all for joining us today. I’d like to take this opportunity to tell you a little bit about Kinoshita Kabuki. There are two major characteristics to Kinoshita Kabuki. The first is that we are “a company that remakes Japanese classics, in particular kabuki and bunraku plays, into contemporary theater.” We work on modernizing these classic texts not with classically trained artists or kabuki actors, but with contemporary theater directors and actors. The other characteristic is that we do not have a fixed director. It’s easy to refer to kabuki as “kabuki” but in fact there are many genres within the repertory such as domestic plays, historical period plays, dance pieces. Each form requires different kinds of directors. For each performance we select a director who is best suited to the piece; we consult with, advise and collaborate with the director in creating the play. This relationship may be very similar to that between a novelist and his editor. Those are the two distinct characteristics of Kinoshita Kabuki. We happen to be in the middle of a run for a piece entitled Kanjincho, which will be closing right after this conversation.

Ikezawa: I saw this Kanjincho the day before yesterday. Since there might be some people who are going to see it later today, I can’t say too much about it but… It was interesting. Really interesting.

Ikezawa:  In theater, the difference between interesting plays and boring plays is like the difference between heaven and earth.  After you see a boring play, your life may become darker, but this Kanjincho was really interesting. I know the story line from beginning to end. So I could just enjoy how you flipped the noh and kabuki aesthetic on its head, where you preserved it, and how you managed to modernize it.

Kinoshita: I’m so happy to hear that.

Ikezawa: And I’m speaking very abstractly right now, because if I were to mention specifics, I’d spoil it for those of you who are seeing it tonight. But I was really impressed. That you could make something like that, based on kabuki. And the impression it left on me right after the show. The more I thought about it, the more I was struck by just how versatile those artists were. Such expressions. Essentially, you left a kind of kabuki-like appeal, and just kept adding to it. That thing in the middle was a rap song, right?

Kinoshita: Yes there was rap.

Ikezawa: There was rap, there was swordplay, there was a tongue twister contest. But the actors were using suriashi (sliding feet) when they walked, and when they cried, they used this hand gesture. That movement is from noh, right?

Ikezawa: So all of these individual elements were melted and fused into one, and yet, each element preserved its integrity. It was quite a feat.

Ikezawa: Is that enough praise?

Ikezawa: It was truly interesting, and I want to see it again. I think for today, I’ll leave it at this level of abstraction.

Kinoshita: …I’m really speechless. I wanted you to see our work for a long time. I’ve known your wonderful work as a novelist, of course, but more recently, I’ve been obsessed with – to the point of jealousy – your work as editor on The Complete Works of Japanese Literature, published by Kawade Shobo Shinsha. I couldn’t believe you could do something like that and well, I was jealous, to be honest. So given all of that, I had this completely one-sided fantasy that perhaps you and I would have a lot in common, thinking about, grappling with, and at reveling in the classics.

Ikezawa:  When I saw Kinoshita Kabuki’s Kanjincho, I felt that you’re doing the same thing I am. There is quite an overlap in the foundations of Kinoshita Kabuki and The Complete Works of Japanese Literature. That’s what I’d like to talk about today. 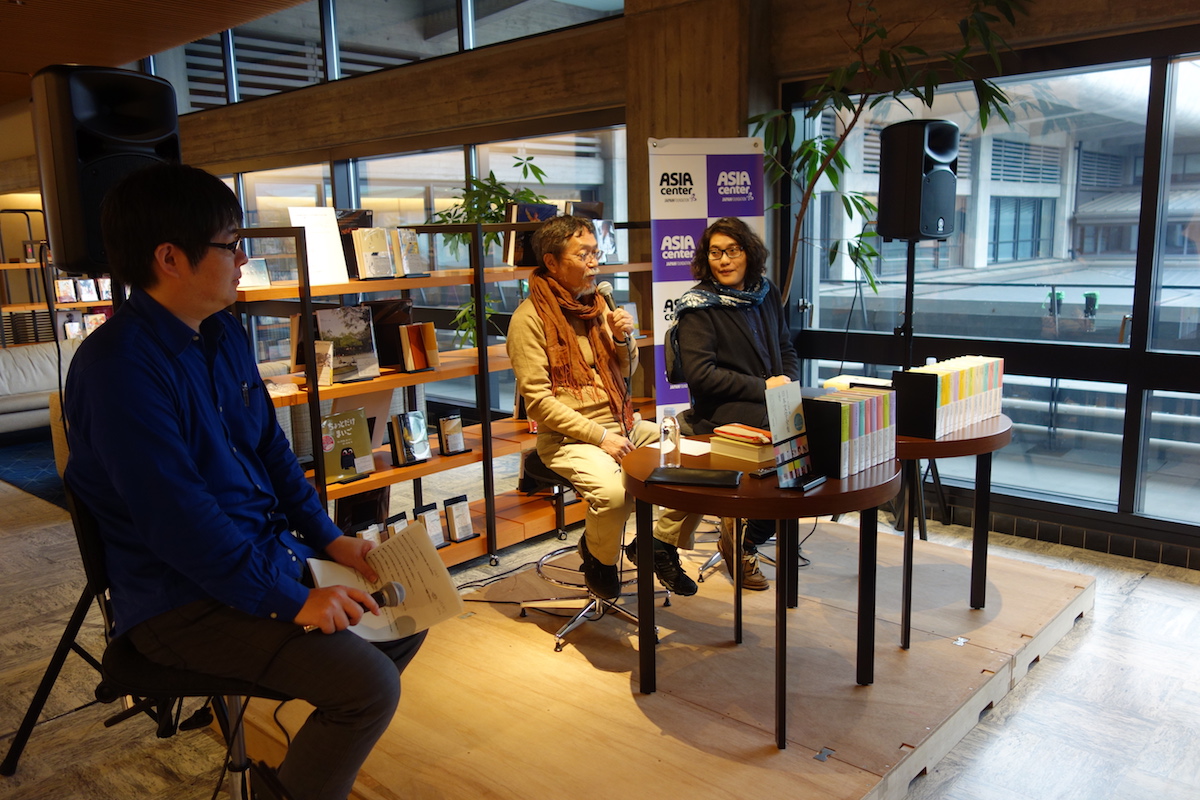